7702 Thunder Fury is an Exo-Force set released in 2006. It includes a red Devastator and its battle machine, the Thunder Fury.

Like most 2006 Exo-Force sets, the battle machine is equipped with a light-up brick and fiber-optic cable to "power up" with. It contains 197 pieces.

The basic build is the same as the other large battle machines, mainly using a SNOT technique. The body is built using a main "bar", which connects to the legs. Four TECHNIC pieces used as levers connect this bar, which the power core connects to, to the sides of the body, which can hinge up and down slightly. When the outer section is pulled downwards, the power core will light up and send the light down the fiber-optic cable it is connected to.

It has a large gun on its right arm which the power cord connects to. The gun is connected to the arm in such a way that it cannot be separately tilted up and down. The arms are built with the same types of bricks as the large knights from Knights' Kingdom II. For the armour on the upper arms and legs, it has two bricks, one maroon and one black, with a maroon 1x2x1/3 brick under the maroon one so that they overlap.

It has eight small guns embedded in/on the chest area of its body. On the top of the body, there are four black harpoon pieces which also appeared in numerous Aqua Raiders and Atlantis sets. Next to the power cord, there is a TECHNIC bar which, when pushed downwards, will eject the power core. It also has a gun on its cockpit made up of a 1x1x1 brick with a stud on each of its four sides. A pair of binoculars attaches to each brick, giving it the appearance of a eight-barreled gun. A similar setup was seen in 7779 The Batman Dragster: Catwoman Pursuit.

Its left arm holds a maroon and black Titanium power-saw. It can rotate 360 degrees, but it can move up and down less than 90.

The Thunder Fury was the most powerful of the original robot battle machines, although as more sets were released, it became less powerful in comparison. In the Exo-Force storyline, when the TECHNIC bar to eject the power core was fired at, the power core would not be ejected, but the vehicle would simply stop working. Its weapons are a titanium power saw and an auto laser cannon. 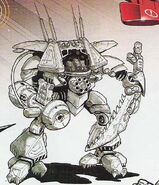