7704 Sonic Phantom is an Exo-Force set released in 2006. It includes one minifigure, a Devastator.

Like all 2006 Exo-Force sets, the battle machine is equipped with a light-up brick, although it does not have the fiber-optic cable.

The basic build of the ship is a long bar made up of TECHNIC pieces. At the front, two turbofans are mounted facing forwards. The fans are equipped with cannons.

The ship has a missile launcher in the center which can be fired by pulling the trigger, which is underneath the body. There are long TECHNIC pieces at the back and front which curve downwards. The parts at the front connect to the turbofans, and those at the rear serve to support the ship and provide a handle, by which the Sonic Phantom can be held. The handle is positioned in such a way that the trigger can be easily pulled.

At the back of the ship, there are two more turbofans, horizontally orientated this time. Their cannons can independently rotate from facing forwards to backwards. The arms which hold the turbofans can hinge up and down.

Fore of the pilot, there is a transparent brick meant to be used as a control panel. In front of this, there is a "sonic screamer" piece which has also appeared in the set 7655 Clone Troopers Battle Pack. There are two more orientated at the frontmost turbofans. In front of that, there is the light-up brick and the missile cannon below it. When the trigger is pulled, the missile can fire and the power core lights up. Connected to the power core is a red lightsaber blade. At each side of the ship are two thick cables.

The Sonic Phantom was a very fast battle machine built by the robots. It was piloted by a green Devastator. Its weapons were a wide-angle laser cannon and rotating laser guns. 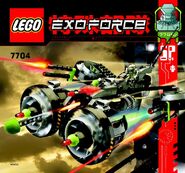 Retrieved from "https://brickipedia.fandom.com/wiki/7704_Sonic_Phantom?oldid=1722397"
Community content is available under CC-BY-SA unless otherwise noted.