Brickipedia
Register
Don't have an account?
Sign In
Advertisement
in: Class 2 articles, Sets listed for ages 6-14, Exo-Force,
and 2 more

The model has an orange colour scheme, although only eight of the pieces are orange (or have orange stickers).

The left arm mainly consists of a double-barreled gun, built using two long gun parts. The barrels can turn, so that the lower and higher guns are reversed. The other arm, the right one, has a double missile launcher attached to it. the missiles are made of red cone parts, black goblets, and dark grey fins. They connect onto the arm using a piece that is seen in 8877 Vladek's Dark Fortress as a torch holder. The arms themselves are made up of TECHNIC pieces. They can hinge up and down at the body, and later on can rotate back and forth. The upper arms are guarded by large orange shoulder armour.

The legs can hinge up and down at the top, although they are in their default position at the lowest place, so hinging them up the full 180 degrees would make the legs stick straight up into the air. Underneath this joint, there is a secondary joint, which can rotate. Connected to this is a third joint, another hinging one. It connects to the main leg piece. The leg piece is guarded by another orange armour part, but a different one from that used on the arms. The leg's fourth joint, a third hinging one, is at the ankle. The legs have an orange piece at the back. In front of that there is a 1x2x1 piece and a 1x2x1 piece with a joint. Finally, to finish off the feet, there are 2x2x2 sloped pieces. They have orange stickers on them.

Uplink was the human mechanic Ryo's first battle machine. One reason for it having no canopy is because Ryo often used it as a platform to fix things from. Ryo often referred to Uplink as if the latter a human being and he frequently talked to it. Uplink was later mass-produced by the humans as a cheap but relatively effective way to counter the robot Sentries. Several copies of Uplink were used during the Striking Venom Battle. Uplink was later replaced by the Cyclone Defender. 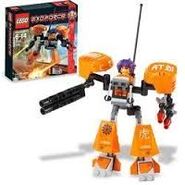