Brickipedia
Register
Don't have an account?
Sign In
Advertisement
in: Class 2 articles, Sets listed for ages 6-14, Exo-Force,
and 2 more

7711 Sentry is an Exo-Force set released in 2006. It includes one minifigure, an Iron Drone.

The feet of the Sentry are built on 2x4x1/3 bases. Behind these, there are hinges that can rotate 180 degrees, although rotating to the full extent would mean that the vehicle was hanging by the feet. Apart from the feet, the shape of the legs are the same as those of Uplink, with the other exception being the plates, which are dark sand in colour, and each have three stickers.

The body has two controls, which the included Iron Drone can hold. The arms connect to the body with three-holed stud-less TECHNIC beams. The next connection, underneath the shoulder-plates, can rotate from side to side. The range of these is from crossing over the body to the same position at the back. The weapons are a gun on the right hand, and double missiles on the left hand. The missiles are the same size as the one used in the Stealth Hunter, consisting of Dark Grey missile flukes with neon yellow tips. The set has a large black antenna on the left shoulder.

Sentries were mass-produced robot battle machines designed to be on the front lines of conflict or guarding strategic points. They were used in nearly every attack on the human side of Sentai Mountain. They were later partially replaced by the Sentry II. 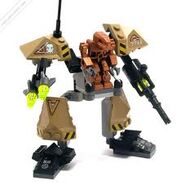