7712 Supernova is an Exo-Force set released in 2006. It contains 283 pieces and one minifigure, Takeshi. It was a Limited Edition Set at its release.

The Supernova is basically the same size as the Silent Strike from the Sentai Fortress. Its feet are built in a similar way. The lower leg armour is similar to that of the Grand Titan, with the exception of the outer side piece.

The body has a central bar up the center that connects to the legs, and the cockpit, arms, and the sides of the body connected to that on various TECHNIC bricks used as levers. There is a TECHNIC bar up the top which, when pushed downwards, will eject the power core, the light-up brick. The 'bar' of this set is longer than those of the first four full-size battle machines, being the same length as that of the Silent Strike.

The canopy piece used on the opening and shutting cockpit is the same as that of the Silent Strike. On the sides of the body, there are sloped pieces similar to the Stealth Hunter, but these have four trans-red missile tips above them.

Both arms have four-fingered hands. The power cord connects to a trans-red gun on the left arm, the hand of which holds a double-barreled bazooka gun. The right hand has a large two-pronged trident, which has a melting tool in the center. On the opposite end, there is a maroon sword originally used for Vladek from Knights' Kingdom II.

On the 'shoulders', there are the bricks used for the sides of the body on hinges, facing outwards. There are six small wings placed behind the body at various places. 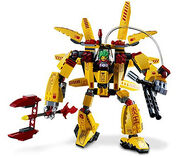