Brickipedia
Register
Don't have an account?
Sign In
Advertisement
in: Class 2 articles, Sets listed for ages 8-14, Exo-Force,
and 2 more

7713 Bridge Walker and White Lightning is an Exo-Force set released in 2006. It includes 632 pieces and four minifigures, namely Meca One, Ha-Ya-To and a pair of Devastators.

The White Lightning's legs are built in the same way as the other large Exo-Force mechs of 2006. The base colour of the structure is dark grey, with red joints. There are white plates with red markings on them. Both hands have six-barreled guns, while the right hand also has a disk launcher. There are two sloping plates beside the seat for the pilot. There is a cockpit using the same canopy piece as the Grand Titan. The vehicle has an antenna with a bazooka gun connected to it. The arms only have one joint, at the shoulders. They do not have an elbow joint.

The Bridge Walker is much bigger than the White Lightning. It has two large, bulky, and unbendable legs, mainly black, with lime green highlights. The body appears to have a rather strange configuration, with the arms' connection almost directly above the legs. This vehicle also has a 'head', which is unusual for 2006 Exo-Force sets. The left arm, controlled by a silver Devastator, has two large guns, with four black 'wings' around them. The right arm has a huge amount of weaponry, with two six-barreled gatling guns, one above the other, and a missile cannon with a lime green missile on the top.

The head is quite long, being about the same length as the rest of the body put together. It connects onto the body at an angle, so that it is not standing straight up, but is not quite lying flat either. It is controlled by Meca One, who pilots the vehicle. There are two power cords curving up from behind him and curving downward to the chassis, where they connect to power cores. At the very rear of the 'head', there is a long sloped piece with an antenna on either side.

The Bridge Walker was made by the Robotic Rebellion and is piloted by Meca One and other Devastators. It had many guns and a disk shooter, and was used regularly for raids and assaults on the Sentai Fortress. White Lightning was a very fast, flying battle machine piloted by Ha-Ya-To. There were multiple version of 'Bridge Walkers', with the robot vehicle in Sentai Fortress also being one. 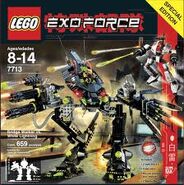