Brickipedia
Register
Don't have an account?
Sign In
Advertisement
in: Class 3 articles, Sets listed for ages 7 - 12, Batman,
and 2 more
English

7781 The Batmobile: Two-Face's Escape is a LEGO Batman set released in 2006. It contains 386 pieces and includes three minifigures.

The set includes the Batmobile, Two-Face's van, and a blockade for either vehicle to smash through. The Batmobile features a forward-mounted rocket, which, when it hits the back of Two-Face's van, will cause the roof of the van to pop up, knocking off anyone positioned on it. The van also includes twin pop-out blasters, and a colour design so that one half is white, and the other half is grey (in Two-Face fashion).

Much confusion occurred with this set possibly due to preliminary designs. For instance, Two Face's armoured truck has more pieces including a back door added to the videogame, the top also looks different, and above the wheels there are different colours. Two-Face has also been in much confusion for LEGO Shop at Home Catalogues have shown Two-Face with various colours of hands, as both flesh, both grey, and white and black instead of flesh and grey. Also, in a picture Two-Face is shown holding a speedometer with yellow elements attached to it which was not included in the final set. In addition, he has two "variations"-one has a black stripe going on the torso part of his leg, the other doesn't. 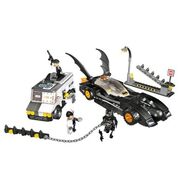 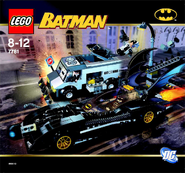 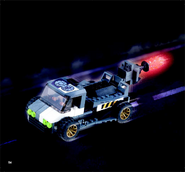 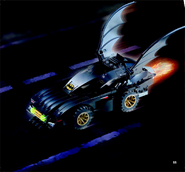 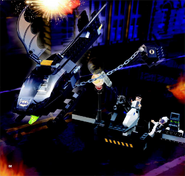