Brickipedia
Register
Don't have an account?
Sign In
Advertisement
in: Class 4 articles, Sets listed for ages 10-14, Batman,
and 3 more
English

Batman uses the Batmobile to fight crime on the streets of Gotham City, mainly because of its power and speed. To suit Batman, he painted it black to match his suit colour. The set was released in 2006 and contained 1,045 pieces. It is one of the few Batman sets released to not include Batman.

The front of the Batmobile 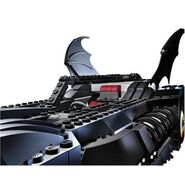 The controls of the Batmobile