The Batcopter: The Chase for Scarecrow

7786 The Batcopter: The Chase for Scarecrow is a Batman set released in 2007. It includes minifigures of The Scarecrow and Batman. The Batcopter features a launching missile, while Scarecrow's biplane drops gas bombs. Both vehicles appear in LEGO Batman: The Video Game, however Robin pilots the Bat-copter. 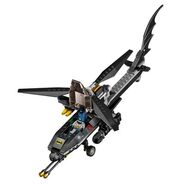 Retrieved from "https://brickipedia.fandom.com/wiki/7786_The_Batcopter:_The_Chase_for_Scarecrow?oldid=1956821"
Community content is available under CC-BY-SA unless otherwise noted.