Brickipedia
Register
Don't have an account?
Sign In
Advertisement
in: Class 2 articles, Sets listed for ages 8-14, 70000 sets,
and 2 more
English

Riddles for the Ring

79000 Riddles for the Ring is a set in the theme The Hobbit: An Unexpected Journey released in November 2012. It consists of 105 pieces, and contains Bilbo Baggins, and an exclusively-printed version of Gollum.

The set consists of a small cave, built primarily out of dark grey bricks, a small brown boat and a fish.

The cave's interior contains a small pedestal on which the One Ring is attached and the pedestal uses grey sloped bricks to give it the appearance of a stone pedestal. The interior is protected by a set of double-doors made out of several sloped bricks stacked beside each other, each of which is hinged on the edge of the cave. Two smaller sloped bricks are on the inner side of each door, leaving a gap through which the ring can be seen. The top of the cave is made of a single plate, with several sloped bricks placed upon it, creating a jagged effect. The walls of the cave are made of more sloped bricks, piled upon each other, creating the illusion of a rock wall. There is a knob on the side of the cave which, when turned, opens two rock doors and rotates the pedestal vertically in order to display the One Ring.

The boat is made up of two brown inverted sloped bricks, connected together by 1x2 plates. Several bones are placed about the craft.

After being captured by goblins, Bilbo Baggins, Thorin Oakenshield and his Dwarves were led to the Goblin King. However, Bilbo managed to escape unnoticed, but he fell down a hole and into a tunnel leading to Gollum's cave. Gollum, upon realising that there was something in his cave, came to investigate. Bilbo hid in the cave and saw the One Ring fall out of Gollum's clothes, so he took the Ring and then followed Gollum. Bilbo, after being found by Gollum, agree's to play a game of the riddles on the condition that if he wins, Gollum will show him the way out, but if he loses, Gollum can eat him. Bilbo manages to answer all of Gollum's riddles correctly, and upon realising that Gollum only told him to tell him a question, not a riddle, manages to win the game by asking Gollum what was in his pocket, a question that Gollum could not correctly answer. However, after this, Gollum realised that he had lost the One Ring, and that Bilbo had taken it. Bilbo put the Ring on, making himself invisible to Gollum, while Gollum heads towards the cave exit in an attempt to find the Hobbit. Bilbo followed Gollum to the exit, and upon finding the way out, leaped over Gollum and made his escape. 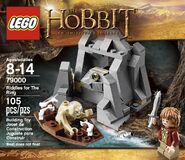 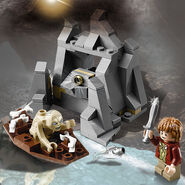 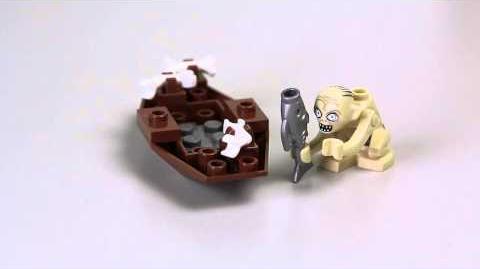 x12px $24.99 +
Released
November 27, 2012 +
ShopDescription
Trick Gollum™ and help Bilbo Baggins™ e … Trick Gollum™ and help Bilbo Baggins™ escape with the Ring!</br></br>On the shores of an underground lake beneath the Misty Mountains, Bilbo Baggins™, armed with Sting, discovers a magic ring that was recently lost by the creature Gollum™. Use the reveal function to take the golden Ring! But beware – only Gollum, aboard his boat of Goblin skin and bones, knows the way out. Can our Hobbit hero solve the riddles asked by Gollum and escape to freedom with the Ring before Gollum realizes it’s gone? You decide as you build and recreate this famous scene from The Hobbit: An Unexpected Journey™. Includes 2 minifigures: Bilbo Baggins and Gollum.</br></br>* Includes 2 minifigures: Gollum and Bilbo Baggins in journey outfit with Sting</br>* Boat with bone elements included</br>* Features rock with opening front section and secret compartment for the Ring</br>* Accessories include the Ring and a fish</br>* Use the reveal function to open the rock and get the Ring!</br>* Escape from the Misty Mountains with the Ring!</br>* Rock measures over 2” (6cm) high, 2” (7cm) wide and 2” (6cm) deep</br>* Boat measures over 0.5” (1.5cm) high, 2” (6cm) long and 1” (3cm) wide5cm) high, 2” (6cm) long and 1” (3cm) wide +
Theme
The Hobbit: An Unexpected Journey +
Title
Riddles for the Ring +
Txt1
Bilbo Baggins +
Txt2
Gollum +
Type
Set +
USPrice
$9.99 +
Advertisement