Brickipedia
Register
Don't have an account?
Sign In
Advertisement
in: Class 4 articles, Sets listed for ages 8-14, The Hobbit: An Unexpected Journey,
and 2 more
English

Attack of the Wargs

79002 Attack of the Wargs is a set in the theme The Hobbit: An Unexpected Journey released in November 2012. The set includes new moulds to represent the Wargs.

Thorin Oakenshield's Company escape Moria and the goblins only to be ambushed by an orc pack. Out of the frying-pan and into the fire, the company is forced to climb a tree that is partially uprooted by Wargs, leaving most of the company hanging over the cliffside. Thorin, in a rage, charges at Azog (the leader of the orcs) in an attempt to save the others, but is badly wounded and is knocked to the ground. Bilbo defends Thorin from his demise, but as more orcs advance, it seems he is also doomed. But as all hope seems lost, Kíli, Fíli and Dwalin rush in to save their leader and burglar, and a fight begins. At the end of the battle, Great Eagles save the party from the remaining orcs, leaving a furious Azog behind...

Thorin up a tree 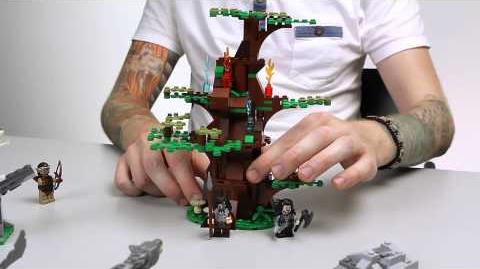