Brickipedia
Register
Don't have an account?
Sign In
Advertisement
in: Class 4 articles, Sets listed for ages 8-14, The Lord of the Rings,
and 2 more
English

The Council of Elrond

79006 The Council of Elrond is a set in the theme The Lord of the Rings released in 2013. The set includes sections of Rivendell and four minifigures: Elrond, Frodo Baggins, Arwen Evenstar and Gimli.

The minifigs included in the set 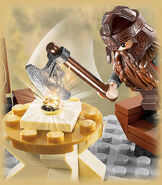 Gimli attempting to smash the ring

x12px $69.99 +
Released
June 2013 +
ShopDescription
Plan the downfall of Sauron at The Coun … Plan the downfall of Sauron at The Council of Elrond!</br></br>Build the majestic Elven city of Rivendell, home to Elrond and his beautiful warrior-princess daughter, Arwen. Call Gimli and Frodo Baggins to The Council of Elrond to plan the destruction of the One Ring and the defeat of Sauron. Place the Ring on the podium and recreate this classic scene from The Fellowship of the Ring! Send Gimli flying with the launch function when he tries to destroy the Ring with his axe. Beware the Eye of Sauron, as he draws closer to the Ring that will lead to the fall of Middle-earth! Includes 4 minifigures with weapons: Elrond, Arwen, Frodo Baggins and Gimli.</br></br>*Includes 4 minifigures with weapons: Elrond, Arwen, Frodo BagginsTM and GimliTM• Features Rivendell setting with unique Elven wall arches, weapon rack, steps, tree, 3 chairs, a podium with minifigure launch function and the hidden Eye of Sauron</br>*Includes 4 weapons: golden Elven sword, bow, Sting and an axe</br>*Also includes the One Ring</br>*Collect the autumn-color leaf elements</br>*Send GimliTM flying with the catapult function!</br>*Beware the evil Eye of Sauron!</br>*Recreate the majestic home of Elrond</br>*Rivendell setting measures over 5" (15cm) high, 9" (24cm) wide and 6" (17cm) deepm) high, 9" (24cm) wide and 6" (17cm) deep +
Theme
The Lord of the Rings +
Title
The Council of Elrond +
Txt1
Elrond +
Txt2
Frodo Baggins +
Txt3
Arwen Evenstar +
Txt4
Gimli +
Type
Set +
USPrice
$29.99 +
Advertisement