7914 Mandalorian Battle Pack is a Star Wars: The Clone Wars set released in January 2011. The set consists of 68 pieces and four minifigures, all Mandalorians.

The set is composed of two main models- a speeder and a gun turret.

The speeder is made up a blue, dark grey and light grey pieces, and is based upon a Balutar-class swoop, a speeder used by Mandalorians during the Clone Wars. The speeder has enough room for a minifigure with a jetpack to sit in, and has handlebars for the minifigure to hang on to. A transparent round brick is used on the bottom of the speeder to hold it up and attempts to make it appear that it is hovering.

The turret has a similar colour scheme to the speeder, and is at an appropriate height for a minifigure to fire a mounted gun from. The gun is black with a transparent red stud. It is composed of several pieces, and can swivel from side to side.

The set includes a total of four identical Mandalorian minifigures with helmets and jetpacks. The only difference between the minifigures are the weapons they carry- one has two blaster pistols, another has a blaster, a third with a blaster rifle, and the final figure has a tripod-mounted sniper rifle, which is built out of several pieces. 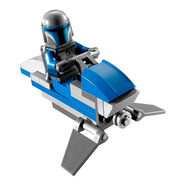 A side view of the speeder

The four Mandalorians with their helmets removed.

The set with boxart in the background.