The T-6 has rotating wings that are red and white in colour. A gear located behind the cockpit controls the rotation. The cockpit fits two minifigures and has a detailed printed windshield. The cockpit can also be detached for use as an escape pod. Underneath, a small TECHNIC piece is used as fold-up landing gear.

T-6 Jedi Shuttles were shuttles manufactored by Slayn and Korpil used to transport Jedi around the galaxy in The Clone Wars, and, occasionally as battle ships. They debuted in Season 2 of The Clone Wars, and were used by Plo Koon and Ahsoka Tano to hunt down Boba Fett and Aurra Sing. 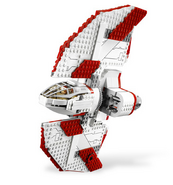 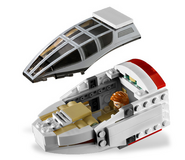 The Shuttle in action