Brickipedia
Register
Don't have an account?
Sign In
Advertisement
in: Class 3 articles, Sets listed for ages 5 - 12, City,
and 3 more
English

7936 Level Crossing is a City Trains set released in June 2010. This set is sold in the United States as a Special Edition set only at LEGO and Toys "R" Us Stores.

Included track elements are four pieces of Straight Rails. It comes with one railway worker minifigure. One of the two main features in this set is the actual level crossing which consists of a green baseplate with four pieces of Straight Rails and two opening and closing gates, along with the lighting signs/signals that indicate that it is safe for a vehicle to pass over. In order to achieve the ability to let vehicles cross the track, part of the track has ramps leading up and over the crossing, and between the ramps lies some "road" made up of light blueish grey tiles.

The other main feature of this set is the railway repair/construction vehicle. It is able to lift track in or out of the surface by its attachable crane boom and grip hook. The base of the crane is 360 degrees rotatable. The cab of the vehicle seats one railway worker and has a blue steering wheel inside for control. The vehicle has both normal and miniature train wheels to allow it to travel on both rail and road. 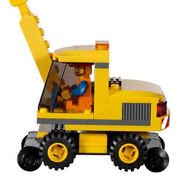