Brickipedia
Register
Don't have an account?
Sign In
Advertisement
in: Class 3 articles, Sets listed for ages 5-12, Castle,
and 4 more
English

7953 Court Jester is a Kingdoms impulse set released in 2010. It was released simultaneously with 7955 Wizard.

The set includes a Jester with three "juggling balls" (coloured studs).The podium is on four brown pieces with a 6x4 brown base above it. There are two red sloping bricks with a white bottle and then a red bottle on it. Above that is a 1x6 red brick with two flags, one gold, one red above that. On those is a red roof end. 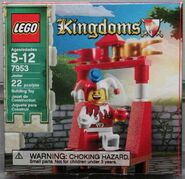