80103 Dragon Boat Race is a Seasonal set released in 2019 to commemorate the Chinese Dragon Boat Festival.

The Dragon Boat Festival is a traditional holiday originating in China, occurring near the summer solstice. A dragon boat is a human-powered watercraft originating from the Pearl River Delta region of China's southern Guangdong Province. These were made of teak, but in other parts of China, different kinds of wood are used. It is one of a family of traditional paddled long boats found throughout Asia, Africa, the Pacific islands, and Puerto Rico. The sport of dragon boat racing has its roots in an ancient folk ritual of contending villagers, which dates back 2000 years throughout southern China, and even further to the original games of Olympia in ancient Greece. Both dragon boat racing and the ancient Olympiad included aspects of religious observances and community celebrations, along with competition. Dragon boat racing is a canoe-sport, and began as a modern international sport in Hong Kong in 1976. These boats are typically made of carbon fiber, fiberglass, and other lightweight materials. For competition events, dragon boats are generally rigged with decorative Chinese dragon heads and tails. At other times (such as during training), decorative regalia is usually removed, although the drum often remains aboard for drummers to practice. 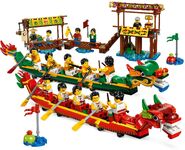 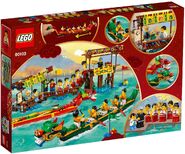 Retrieved from "https://brickipedia.fandom.com/wiki/80103_Dragon_Boat_Race?oldid=1962304"
Community content is available under CC-BY-SA unless otherwise noted.