Brickipedia
Register
Don't have an account?
Sign In
Advertisement
in: Class 3 articles, Sets listed for ages 8+, Seasonal,
and 3 more
English

View source
watch 06:00
Wiki Targeted (Games)
Do you like this video?
Play Sound

The lion dance is a form of traditional dance in Chinese culture and other Asian countries in which performers mimic a lion's movements in a lion costume to bring good luck and fortune. The lion dance is usually performed during the Chinese New Year and other Chinese traditional, cultural and religious festivals. It may also be performed at important occasions such as business opening events, special celebrations or wedding ceremonies, or may be used to honor special guests by the Chinese communities.

The Chinese lion dance is normally operated by two dancers, one of whom manipulates the head while the other forms the rear end of the lion. It is distinguishable from the dragon dance which is performed by many people who hold the long sinuous body of the dragon on poles. Chinese lion dance fundamental movements can be found in Chinese martial arts, and it is commonly performed to a vigorous drum beat.

There are two main forms of the Chinese lion dance, the Northern Lion and the Southern Lion. Both forms are commonly found in China and around the world especially in Southeast Asia, the Southern Lion predominates as it was spread by the Chinese diaspora communities who are historically mostly of Southern Chinese origin. Versions of lion dance related to the Chinese lion are also found in Japan, Korea, Tibet and Vietnam. Besides the Chinese-based lion dance, the other forms of lion dance also exist in Indonesia, for example the Barong dance in Javanese and Balinese cultures. 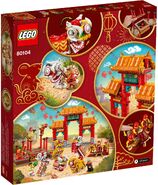 x12px 74.99 € +
Released
January 15, 2020 +
ShopDescription
Capture all the color, fun and excitement … Capture all the color, fun and excitement of a famous Chinese tradition with this stunningly detailed LEGO® Lion Dance (80104) toy playset – an ideal Chinese New Year gift for kids to teach them about this symbolic dance for good luck. For display and unlimited play The 5 beautifully decorated small lion figurines can be placed on a stage with podiums to recreate the dance, and there's a percussionists' stage with a cool drumming function. The tiles on the LEGO temple gate are decorated with striking, traditional patterns. There are also 8 minifigures for role-play, including lion dancers and a man in rat costume to mark the Year of the Rat. Accessory elements such as the red ‘best wishes’ scroll, red orb, cabbage, calligraphy brush and a rocket firework inspire unlimited play. Celebrate Chinese traditions! Collectible Chinese Traditional Festival LEGO sets offer rewarding building challenges and role-play fun for anyone interested in Chinese culture. They also make beautiful centerpieces.</br></br>*Recreate all the color and fun of the traditional Chinese lion dance and temple fair with this LEGO® building toy for kids, featuring 5 dancing lions, percussionists’ stage, beautifully detailed temple gate and more.</br>*This collectible toy building set includes 8 minifigures for role-play and is packed with features to inspire fun, such as podiums to make the small lion figurines dance and a drumming function.</br>*Traditional items such as the red orb, cabbage, calligraphy brush, rocket firework and red ‘best wishes’ scroll add play options, and this set fits well with the LEGO® Chinese New Year Temple Fair (80105) toy playset.</br>*This 882-piece, LEGO® brick educational toy playset offers a fun, challenging building experience for kids aged 8 and up, and makes a cool, creative LEGO gift to celebrate Chinese New Year and other cultural festivals.</br>*The LEGO® temple gate measures over 5” (15cm) high, 7” (19cm) wide and 1” (3cm) deep – and together with the dance and percussion stages, Chinese dancing lion figurines and minifigures, it makes a magical centerpiece.</br>*Power up kids’ imagination with this battery-free Chinese New Year toy, encouraging them to develop their creative skills as they learn about a great Chinese tradition and make up their own fun festivities.</br>*Thinking of buying this unique gift toy for kids new to LEGO® sets? No problem. It comes with easy-to-follow, step-by-step building instructions. Open the box and away they go!</br>*LEGO® Chinese TraditionalFestival creative toys are great for display and offer a variety of rewarding building challenges and role-play fun for anyone interested in Chinese culture.</br>*LEGO® building bricks meet the highest industry standards, which ensures they are consistent and compatible, connect strongly and pull apart easily every time – it's been that way since 1958.</br>*LEGO® bricks are tested in every way you can imagine, ensuring that each construction kit meets the highest safety standards and that this LionDance collectible toy is as robust as it is beautiful to look at.s as robust as it is beautiful to look at.
Theme
Seasonal +
Title
Lion Dance +
Txt1
Drummer +
Txt2
Drummer +
Txt3
Drummer +
Txt4
Man +
Txt5
Boy +
Txt6
Rat Costume Dancer +
Txt7
Dancer +
Txt8
Dancer +
Type
Set +
USPrice
$79.99 +
Advertisement