8014 Clone Walker Battle Pack is a set released in December 2008/January 2009 as part of the second wave of The Clone Wars line. It is a Battle Pack that contains four minifigures, including two Clone Troopers, a Clone Gunner and a Clone Commander, with ARC and commander gear. It also includes a small walker. This is one of two 2009 battle packs, the other being the Assassin Droids Battle Pack.

The walker has posable legs, which allow it to 'walk' forwards. Each leg has three joints, each of which can rotate up and down. Two Clone Troopers sit in the body, which holds the weaponry of the walker; two flick-fire missiles and a blaster gun. The set also includes a black set of ARC gear. This was the first set in which it was released in that colour.

The walker is believed to be an AT-RCT (All Terrain Riot Control Transport). Several of them were deployed at the beginning of The Clone Wars movie, where they ran out to fight the Separatist forces. 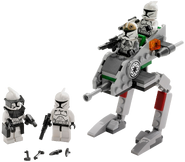 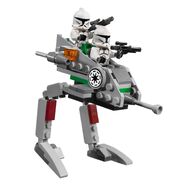 The Clone Walker in battle