801 Space Rocket was a set manufactured by Samsonite in 1964. It contained 112 pieces to build a small rocket. This was the first Space themed set released by The Lego Group 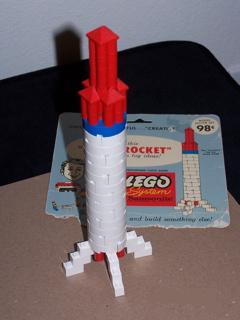 Retrieved from "https://brickipedia.fandom.com/wiki/801_Space_Rocket?oldid=226523"
Community content is available under CC-BY-SA unless otherwise noted.