Free in the UK (Promotional)

The set is mainly dark stone grey and black. The cockpit is a smooth 1x3 sloped black piece, with another sloping piece facing the opposite side, except in a different colour. In front of the cockpit is a 1x4 tile, which leads to a 1x1 slope brick on the front of the ship. A flat black piece runs underneath the whole ship. At the front of the ship, underneath the flat black piece is an upward slope piece. To the left and right of the ship are two long sloped pieces, with brown and tan pieces on top of it, by the tile. At the very end of the sloped piece is a 1x2 sloped brick with small slots in it. In front of that piece is a tan circular flat brick, with a black cone piece on top of it, and a light stone grey stud is on top of that.

General Grievous' Starfighter, or the Belbullab-22 starfighter was a heavy starfighter used in the Clone Wars. A modified version was owned by General Grievous, with an elite hyperdrive allowing Grievous to stay mobile on a galaxy-wide scale. In order to remain in touch with his forces while flying his fighter, a powerful but compact HoloNet transceiver was installed onboard. Belbullab-22 starfighters were equipped with two rapid-fire triple laser cannons. 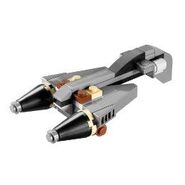