It has six functions:

It can be rebuilt into a tracked loader/bulldozer, which is also remote controlled.

During its release, the set was reported to lack a strong enough digging arm to lift the boom of the excavator. This was due to the piece experiencing strain. LEGO has since offered a full refund or Shop@Home credit. They have also offered to send a more efficient replacement part. People who bought the set have been offered £10.00 store credit.

There has since been released a service pack that has been shipped to owners of the Motorized Excavator. The pack includes 4 new Linear Actuators, 2 Blue Axle-Pins, 1 3M axle with stop, and 1 Axle and Pin Connector Perpendicular 3L with Center Pin Hole. There are also updated steps 33 and 36, where the parts (not including the LAs) are incorporated. 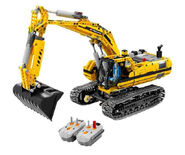 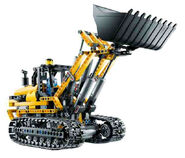 The Excavator in action.

An alternate view of the Excavator.