8056 Monster Crab Clash is a 68 piece Atlantis set released in November 2009. It Includes is Axel Storm.

The crab has six legs and two pincers. Axel Storm is equipped with a harpoon gun. This set also includes the orange Atlantis key.

The crab is one of the guardians of Atlantis and attacks with its claws or by running into enemies. It can also walk sideways, dig into the seafloor and swim. Its weakness is that it is unable to get free when trapped in a giant crab cage. It guards the Atlantis Crab Key.[2] 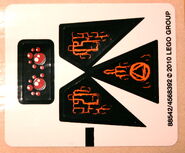 The sticker sheet.
Add a photo to this gallery

Retrieved from "https://brickipedia.fandom.com/wiki/8056_Monster_Crab_Clash?oldid=1657369"
Community content is available under CC-BY-SA unless otherwise noted.