Bobby facing down the Shark. 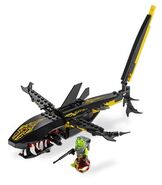 The set on display.
Add a photo to this gallery

$24.99 +
Released
December 4, 2009 (US) / January 1, 2010 (UK) +
ShopDescription
This treasure guardian packs a bite! … This treasure guardian packs a bite!<br />In his search for the red Atlantis treasure key, the deep-sea diver has encountered one of the deadliest guardian creatures of all: an enormous black shark covered in Atlantean markings! Will the diver’s harpoon and swimming skills be enough to escape the shark’s snapping jaws and thrashing tail with the precious key, and its clue to the lost city’s location?* The heroic diver minifigure has an awesome harpoon!* Red Atlantis treasure key included; collect them all!* Fearsome shark guardian has biting jaws, moving tail and poseable head!iting jaws, moving tail and poseable head! +
Theme
Atlantis +
Title
Guardian of the Deep +
Txt1
Bobby Buoy +
Type
Set +
USPrice
$14.99 +