Brickipedia
Register
Don't have an account?
Sign In
Advertisement
in: Class 2 articles, Sets listed for ages 7 - 14, Atlantis,
and 3 more
English

The Seabed Scavenger is a three-wheeled submarine used to move around the seafloor. From the hubs of the front wheels extend two articulated robot arms, one equipped with a giant disk saw, the other with a large robotic claw. In the middle of the vehicle is a one-man cockpit with a transparent neon-green canopy. Behind the canopy are two searchlights, a small antenna tower with navigation lights, and two Flick-Fire Missiles.

The cockpit contains just a single control stick and is technically not watertight, since there are large gaps underneath the cockpit that would allow water to enter.

The Scavenger was first built by Dr. Jeff Fisher; it was later rebuilt by Captain Ace Speedman, using bricks found in the docking bay of the Neptune,[2] though the included Minifigure is Lance Spears.

Both the saw and the claw are versatile tools, with the saw being able to cut with the same ease through seaweed and rocks, while the claw can handle delicate tasks like grabbing small items, as well as more blunt jobs such as crushing heavy objects.[2]

A prototype of the Seabed Scavenger.

The final version of the Seabed Scavenger.

The Seabed Scavenger with cockpit open. 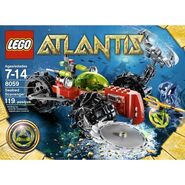