Brickipedia
Register
Don't have an account?
Sign In
Advertisement
in: Class 2 articles, Sets listed for ages 8 - 14, 2010 sets,
and 3 more
English

8075 Neptune Carrier is an Atlantis set released in December 2009.[1] Included are three Divers, and one Manta Warrior armed with a Trident, a large submarine, an underwater scooter, a small underwater rover and a brick-built Sting Ray Guardian. Also included is one exclusive Manta Ray key. At the time of its release, it was the largest Atlantis set.

The Neptune Carrier consists of a narrow main hull with the cockpit at the top and a wide hangar section at the bottom. The cockpit is protected by a neon-green canopy, has just enough room for one Minifigure and contains a control monitor on a 2x2 slope brick. Behind the cockpit is a small antenna tower with navigation lights. Below the cockpit is a small lab that contains another monitor and can be accessed by flipping up its sidewalls that hold tools (on port) and harpoon guns (on starboard). Behind the lab is a large stern thruster and below it, at the lowermost part of the ship, the wide hangar bay that usually holds the underwater rover. The rover can access the bay via an inclinable ramp at the front. At the far port and starboard sides of the hangar section are two forward facing propellers and in the middle are two big searchlights. At the front of the main hull are four small, green, forward-facing auxiliary lights. Four flick-fire missiles are mounted on wings that extend from below the antenna tower, immediately behind the cockpit. At the very aft of the sub, right behind the stern thruster, is a docking point for the underwater scooter.

The rover has two robot arms with grippers at its front and is controlled with a pair of control sticks. The scooter carries two harpoon guns and has two propellers.

In the storyline, the Neptune's docking bay contained the bricks that were used build the Seabed Scavenger and the Typhoon Turbo Sub, and is usually filled with all sorts of equipment and bricks that the crew can use to build new vehicles.[2]

The crew consists of Ace Speedman, who is also the captain of the sub,[3] Dr. Jeff Fisher and Axel Storm. 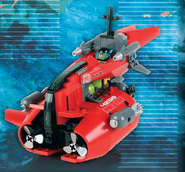 A prototype of the Neptune Carrier.

The final version of the Neptune Carrier. 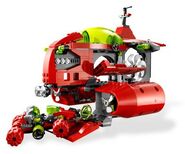 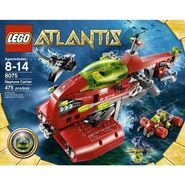 The Neptune Carrier as it appeared in LEGO Atlantis: The Movie.