Brickipedia
Register
Don't have an account?
Sign In
Advertisement
in: Class 4 articles, Sets listed for ages 7 - 14, Atlantis,
and 3 more
English

The set 8076 Deep Sea Striker is a LEGO Atlantis set released in late May 2010. The set contains a Giant Scorpion with the green Manta Ray Key. Lance Spears has a small vehicle that looks like a droid STAP from Star Wars. The Deep Sea Striker is one of the four second wave Atlantis sets (the others being the Undersea Explorer, the Atlantis Exploration HQ and the Portal of Atlantis,

The scorpion is a body with everything else attached to it: the claws, the legs, the head and the tail. The claws can open and close and the teeth on the mouth can move. The main function is that the tail that can move front and back. The vehicle for Lance Spears is very small but it has an arm that can hold the key.

Image from the Canadian Toy Fair. 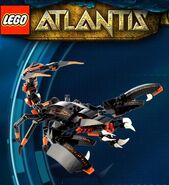 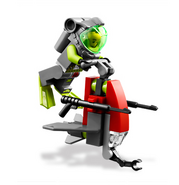 A shot of the Scorpion.