8087 TIE Defender is a LEGO Star Wars Expanded Universe set, and was a part of the first 2010 wave. The set contains 304 pieces, and includes one Stormtrooper and one TIE Pilot minifigure with a redesigned helmet.

The set features a rotatable cockpit and the characteristic three-winged design of the TIE Defender. It also has six flick-fire missiles (two mounted on each wing). The minifigures included are a Stormtrooper with a blaster pistol, and a TIE Pilot with a newly redesigned helmet.

The TIE/D Defender was a shield and hyperdrive equipped TIE series starfighter and was armed with 4 laser cannons, 2 ion cannons and 2 warhead launchers. This starfighter was utilized in the Empire's campaign against former Grand Admiral Zaarin, and was later used by the Imperial Remnant after the death of Palpatine, also being utilized in the Yuzzhan Vong War. This history would later be reclassified as Star Wars Legends, though the Defender would reappear in canon in Star Wars Rebels. 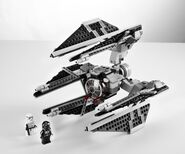 $89.99 +
Released
December 2009/January 2010'"`UNIQ--ref-00000001-QINU`"' +
ShopDescription
The secret weapon of the Empire is here … The secret weapon of the Empire is here!<br />Built in response to the Rebellion’s highly-skilled starfighter forces, the top-secret TIE defender is the ultimate expression of Imperial power and technology! Never before made as a LEGO set, this unique 3-winged TIE fighter blasts into battle with 6 flick-launching missiles and an opening cockpit that rotates when the model turns.* Includes TIE defender, stormtrooper and new TIE fighter pilot* TIE fighter pilot equipped with new helmet* Blast the 6 flick-firing missiles -- 2 on each wing* Turn the TIE defender to rotate the opening cockpit* Measures over 8" (20cm) tall; over 9" (22cm) wides over 8" (20cm) tall; over 9" (22cm) wide +
Theme
Star Wars +
Title
TIE Defender +
Txt1
Stormtrooper +
Txt2
TIE Pilot
(New design) +
Type
Set +
USPrice
$49.99 +
Advertisement