Brickipedia
Register
Don't have an account?
Sign In
Advertisement
in: Sets listed for ages 7 - 12, Star Wars, 8000 sets,
and 3 more
English

The set 8093 Plo Koon's Jedi Starfighter is a Star Wars: The Clone Wars set released in July and August of 2010; also, the set appeared in toy stores in the Netherlands around late May of that year. The set includes Plo Koon and R7-D4 minifigures. Some notable features include the ability to eject Plo Koon from the cockpit, a space to seat the Astromech Droid (R7-D4), and a holder for Plo Koon's lightsaber. The set is similar to several other Jedi Starfighters released in the past several years; (see: other sets containing Jedi Starfighters). It has 175 pieces.

The set features a cockpit with a place for the minifigure, in this case, Plo Koon, to sit, with a piloting computer in front. There is a windshield above the cockpit, but unlike other Jedi Starfighters in the past, there is a small tab underneath the ship which when pushed, ejects Plo Koon from the pilot's seat. Directly ahead of the main cockpit, is the compartment for the Astromech Droid, as with all Starfighters of this type. The droid is placed on two studs protruding from the floor of the compartment, allowing the droid to attach firmly, and not fall out during flight. On the left side of the ship is a clip acting as a holder for Plo Koon's Lightsaber.

Plo Koon's Delta 7-B Aethersprite-class Light Interceptor, nicknamed the Blade of Dorin, was gifted to him by Anakin Skywalker after Plo's Venator-class Republic Attack Cruiser was destroyed by the Malevolence. Plo gave the ship his custom paint job to camouflage it against a blue sky, similar to that of another ship of Anakin's. Plo Koon took his fighter through several important battles in the Clone Wars including a battle against the Malevolence at the Kaliida Shoals Medical Centre, and a battle at Felucia. He would later this starfighter for a newer one, similar in design and paint job, closer to Star Wars Episode III: Revenge of the Sith.

A close-up of the nose.

The starfighter on display.

The set with box art.

Clone Turbo Tank in the background.

The Starfighter in landing mode. 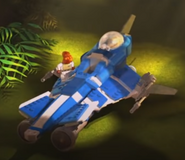