Brickipedia
Register
Don't have an account?
Sign In
Advertisement
in: Sets listed for ages 9 - 14, Star Wars, 8000 sets,
and 3 more
English

8096 Emperor Palpatine's Shuttle is a Star Wars Episode III: Revenge of the Sith set released in July 2010 (although the set appeared in Dutch toy stores in late May). The set consists of 592 pieces, including four minifigures. Some notable features include the ability to open the cockpit, allowing the pilot access to the controls, folding wings and retractable landing gear which also folds up into the bottom of the ship, the ability to open the interior of the back of the ship, and the mechanism with which to place the iconic Darth Vader helmet onto a wounded Anakin Skywalker. This set is somewhat similar in design to the earlier 2009 set: 8019 Republic Attack Shuttle. Although this set is from the Episode III: Revenge of the Sith line, LEGO lists it as being from the Star Wars: The Clone Wars line.

The set features two large wings, which have the ability to fold up or down, independent to that of the ship's position. On the underside of the ship is a landing gear that can be extended or retracted, but again, must be with some kind of outside interaction, not of its own accord nor in relation to the position of the ship. In the front of the ship is a large cockpit module protruding from the front of the shuttle. The windshield above the cockpit has the ability to be lifted, allowing for access to the pilot's seat and controls. Behind the cockpit on either side, are two handles which can be locked into a "closed" position. These handles allow for the opening of the back hatch. Underneath the main hatch, in the interior if the ship, are two holders for Palpatine and Anakin's Lightsabers, a medical table for Anakin, and a mechanism allowing for the transformation of Anakin to Darth Vader. Contrary to the Episode III movie, in which Anakin is brought to a medical facility on Coruscant before being outfitted with his suit, this set gives the ability to outfit Anakin with part of the suit while still on the ship. There are two small tabs on the back of the ship, which when pressed, place a Darth Vader helmet onto Anakin's head, and push the medical bed into standing position, similar to the scene in the end of Episode III, or the set 7251 Darth Vader Transformation from 2005. The entire ship's design is very reminiscent to that of the 2009 8019 Republic Attack Shuttle as previously mentioned above.

Three of the four minifigures in this set are exclusive. These include the new burned Anakin, redesigned from the 2005 version of the same name, the Medical Droid, which is also the same as the one that appears in the Star Wars The Clone Wars animated series, and the redesigned Clone Pilot. The Clone Pilot was redesigned earlier in 2010 for release in the set 8088 ARC-170 Starfighter, with the new, open-faced helmet as appeared in Episode III. It was given a new face and slightly tweaked helmet print specifically for this set. The Medical Droid is also exclusive to the set with a new piece which consists of the body and head. The colour of this piece though is different to the arms and legs of this minifigure. Also included is the newest version of Emperor Palpatine, which was first introduced in the 2008, 10188 Death Star.

Palpatine's personal shuttle was an upgraded Theta-class T-2c shuttle (used by only the most powerful and influential senators at the time), which he used while he was Chancellor, and to brief extent, as the Emperor. It was upgraded by the starship company Warthan's Wizards to include a hyperwave reflector which could be used to send and receive secret transmissions (equalling the capability of the reflectors owned by the Jedi), as well as a sensor mask which could hide whatever contents the shuttle carried. These models were phased out in favour of Lambda-class T-4a shuttles which had improved defensive and firepower capabilities. Palpatine used this shuttle to recover and transport Darth Vader's body after his defeat on the lava-planet of Mustafar to a medical facility on Coruscant where he would later don his famous suit. This particular shuttle contained onboard medical and life-support equipment (it kept Vader alive long enough to survive the journey to the surgical centre), as well as torture equipment and Sith potions. 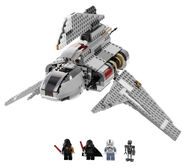 An alternate view of the set.

The shuttle in flight.