8098 Clone Turbo Tank is a Star Wars: The Clone Wars set released in 2010. The set consists of 1141 pieces- an A6 Juggernaut, also known as a Clone Turbo Tank (CTT), and a small Scout Walker, similar to the AT-RT made in 2005 for the Revenge of the Sith line. The Tank features flick-fire missiles, troop seating in each of the two dual cockpits, a handle similar to the one in 7675 and 10195, and a small "Command Center" similar to the one included in 7676. Minifigures included are Anakin Skywalker (The Clone Wars), two The Clone Wars Clone Troopers, Cad Bane, Ahsoka Tano, and Aayla Secura.

The set features rolling wheels, opening doors and panels, moveable laser cannons, a Scout Walker, and a command centre. The tank itself can roll by use of the ten wheels, but the axles can pivot on the centre point of the tank giving it the ability to rock side to side and roll over large pieces of debris. All of the axles have this ability to pivot up and down, except the centre axle on each side which uses independent suspension. Utilizing an element with a spring that acts as suspension, these axles and wheels keep the tank level when resting on a flat surface.

Unlike the first version of the set, 7261 Clone Turbo Tank which was released in 2005, the 2010 rendition features new, larger and more accurate wheels. The original wheels worked as one piece, however, the new version requires a disk to serve as a cover for the inner portion. Also unlike the first version, the new version includes a retractable handle with which the set can be picked up with either your hand or the Dropship included with 10195 Republic Dropship with AT-OT Walker. The mounted laser cannons on the lower front of the tank are also larger and more accurate.

Each of the two cockpit's roofs can be opened to reveal controls and troop seating. There are also several headlights mounted on the front of the tank. Towards the centre of the vehicle is an engine which can be revealed by opening two panels on either side. On the top there are two mounted laser turrets, one of which is manned by a Clone Trooper. One each side of the tank, there are two large doors that can be opened to reveal the main interior of the vehicle itself. These doors are held shut by a small element at the top of the compartment. The small command centre and Scout walker are stored on the inner side of these doors. On the outside is another large laser cannon. Unlike the first version, and unlike the actual tank, this version does not feature missiles on the side of the froward cockpit probably in order to replicate the Clone Wars-era look of the CTT. As with some of the Clone Wars variations and later generations of the tank, there was no spotter's pod above the tank as seen in this version.

The small Command Centre included with the set consists of two computer screens and levers contained within one small module. The module has seating for two Minifigures. The centre is stored on the inner side of the main troop bay doors on the Turbo Tank, but is easily removed. The Command Center is very similar in design and function to the one included in the 2008 rendition of the Republic Attack Gunship. The Scout Walker was designed using pieces to make it smaller and more compact than existing Clone Scout Walkers in order for it to fit into the tank's troop bay, where it is folded up and slots into a panel on the side of the walker. The walker features controls for one trooper, and has posable "legs" and a mounted laser cannon on the lower front.

Also included in the set is a small "weapons module", which fits into the tank like the Walker and Command Center. This module holds two Blaster Rifles and two Blaster Pistols, and is located between the main troop bay and the rear cockpit. This chamber replaced the engine as was seen in the previous version from 2005; 7261 Clone Turbo Tank.

The Heavy Assault Vehicle/wheeled A6 Juggernaut also known as the "Clone Turbo Tank" was a heavy assault tank heavily used in the latter stages of the Clone Wars, and was developed by Kuat Drive Yards. The tank featured many large laser turrets and cannons. The A6 was an upgraded version of the outdated A5 Juggernaut tank. Unlike its predecessor, the A6 was much larger and had an expanded interior allowing for more troops (up to 300) to be transported into battle as well as speeders and light airspeeders. It required a crew of twelve, but with an automation package, that could be reduced to only two pilots. It featured many weapons including rapid-repeating laser cannons, heavy-repeating laser cannons, anti-personnel laser cannons, and rocket grenade launchers, among many others. They were known to be used in the Battle of Kashyyyk as well as several other key battles during the Clone Wars. They were slowly phased out during the rise of the Empire, and were replaced by the HAVt B5 Juggernaut which was slightly lighter, however, some of the remaining A6s were utilized by the Rebellion. Some of the CTT's features would show up in later generation AT-AT Walkers.

An alternate view of the set.

Dorsal view of the vehicle.

The set in front of a black background.

The tank on the planet of Felucia.

The rear end of the tank. 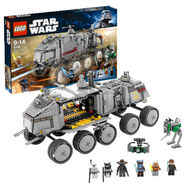 The set, the minifigures and the box.