81000 Koi Model is a FORMA set released in 2019. It was the flagship set of the FORMA line, and is currently the only FORMA set to be released.

The set contains 294 pieces, which are used to build a model of a Koi fish. Around 95% of the pieces used are TECHNIC pieces, which build a round base at the bottom with a TECHNIC stand used to hold the main koi build. The build itself uses TECHNIC pieces and is split into multiple segments, being held up by two different stands that are connected to the base. The inside pieces construct a movable koi that is able to move from side to side, somewhat like a real fish. They also form a fish shape that the skin can be attached to. The main skin, which is the Koi skin, has a white head with brown dots. This part of the skin attaches to the front portion of the build, and has large eyes built into it. There are six different fins, the dorsal fin, tail fin, and four pelvic fins. These fins are decorated with a inky gray and black color. The body of the fish, separated into two different skin sections, is white with large black and orange splotches and a few small brown dots. 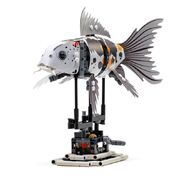 Build
Add a photo to this gallery

Retrieved from "https://brickipedia.fandom.com/wiki/81000_Koi_Model?oldid=1964029"
Community content is available under CC-BY-SA unless otherwise noted.