Brickipedia
Register
Don't have an account?
Sign In
Advertisement
in: Class 2 articles, Sets listed for ages 7–14, Exo-Force,
and 3 more

The Aero Booster is made up of a small battle machine and a pack that fits on the back that enables it to fly. It is around the size of the Cyclone Defender and the Claw Crusher. The walker has many stickers and multi-coloured bricks. The feet are dark grey, and are joined onto the legs by a ball-joint. The legs are symmetrical, apart from the stickers on the plating. The body has pipes going out from the sides to the hands, and four guns on the sides. The cockpit has a glass at the front, and a white Exo-Code. The arms are similar to the legs, but have hands at the end where the cords connect onto them.

At the front middle of the pack, there is a compact component the joins all of the set together. Embedded in the centre top of it, a missile cannon is placed that can be fired from a trigger at the bottom. Near the back of this part of the pack, two long red wings are positioned next to the back engine. Underneath the middle component of the pack, there is a handle to hold and support the battle machine.
At the sides of the middle section of the pack, four pieces are placed to join on other parts of the pack. The two front of these connect arms with large guns placed on the end onto it. Behind the arms and another behind the middle part, three huge engines with blue turbo fans at the back are positioned, enabling the vehicle to speed through the air. On each of these engines there are large wings angled outwards on the outside.

In Exo-Force, the Aero Booster was built by Ryo. In the LEGO comics, it is seen combatting the Combat Crawler X2, another two part battle machine. 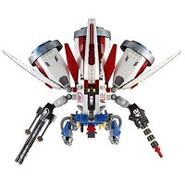 An aerial view of the set 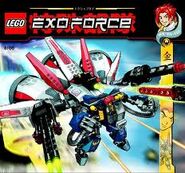 $49.99</span></span>[File:Flag-NZ.png|x12px|link=]] $49.99 +
Released
June 1, 2007 +
ShopDescription
Built by Ryo from designs downloaded from … Built by Ryo from designs downloaded from the golden computer, Aero Booster is a standard battle machine body with a massive, detachable rocket and weapons pack. This amazing piece of machinery allows the Aero Booster to achieve speeds even exceeding that of the Sky Guardian, as well as giving it weapons power superior to any other battle machine in EXO-FORCE’s arsenal. Piloted by Ha-Ya-To, it is the most powerful defender of the golden city.most powerful defender of the golden city. +
Theme
Exo-Force +
Title
Aero Booster +
Txt1
Ha-Ya-To +
Type
Set +
USPrice
$29.99 +
Advertisement