The predominantly green Chameleon Hunter is a battle machine belonging to Hikaru. The left arm has a flame thrower and double guns. A drill sits on top of the weapons array, and the long bar of the minibot fits through the weapon and in front of the drill. The second arm has a giant claw, made up of three red claws, which are also included in 8059 Seabed Scavenger in silver and 8117 Storm Lasher in yellow. A transparent lime missile tip sits at the end of the bar. Both of the shoulders are equipped with missiles. On the left side of the body, there is a scanner with a transparent blue dish piece, connected to a robot hand. There is an antenna on the other side. The minibot is primarily green, and wields two red scythe blades. It is one of the larger minibots on the human side. The Exocode, on a green 2x2, is on the same arm as the giant claw.

Hikaru used the Chameleon Hunter to find Sensei Keiken. Since Exo-Force was abruptly stopped, the fate of the vehicle is unknown. 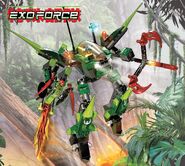 The set with its box

The sets features
Add a photo to this gallery

Retrieved from "https://brickipedia.fandom.com/wiki/8114_Chameleon_Hunter?oldid=1589590"
Community content is available under CC-BY-SA unless otherwise noted.