8131 Raceway Rider is a 2007 set released under the Tiny Turbos Racers line that isn't based upon any specific car in reality. It includes a tiny turbo raceway rider with a sleek look including a wide rim and large back tail-fin. The 11 stickers are attached to many parts of the raceway rider making three attached to the tail-fin, two attached to the back hood behind the glass, four with one on each of the wheel's rim, two with one on each of the side-skirts, one on the front hood, and one on the front plate. 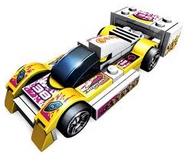 Retrieved from "https://brickipedia.fandom.com/wiki/8131_Raceway_Rider?oldid=1968609"
Community content is available under CC-BY-SA unless otherwise noted.