Brickipedia
Register
Don't have an account?
Sign In
Advertisement
in: Class 2 articles, Sets listed for ages 7 - 14, 2010 sets,
and 3 more
English

8188 Fire Blaster is a set released in December of 2009[1] as part of the LEGO Power Miners line (it is the twelfth set in the series). Included are Rex and Combustix Minifigures.

The Fire Blaster is a small vehicle, a size relating to the number of parts. The vehicle essentially consists of a plate with axles attached; a round part connects the water tank dome to the chassis. Stickers are added for effect. The front consists of a Power Miners rollcage part attached to a bracket in the middle of the Fire Blaster. Attached to the rear of the water tank area is a flexible silver hose that in turn connects to a cannon mounted at the front of the vehicle. A translucent blue flame represents water emitted from the cannon, and is attached via a lamp piece. Parallel to the water cannon is a flick-firing missile with dynamite attached by a plate.

Rex wears heat-resistant armor, which consists of the stock Power Miners helmet in silver. Combustix, despite being darker yellow in colour, is included with a trans-neon yellow crystal like Sulfurix. 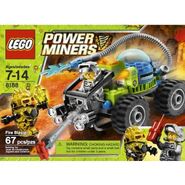 Jump o … Battle at the planet’s core!</br></br>Jump over streams of molten magma with the Fire Blaster’s powerful engine, use the dynamite launcher to clear the way of volcanic rocks, and fire the water cannon to keep the hostile lava monster Combustix at bay!</br></br>* Includes Power Miner driver and yellow lava monster Combustix!</br>* Combustix's not too hot to handle -- put him out with the water cannon!</br>* Powerful Dynamite Launcher blasts right through volcanic rock!</br>* Open the cockpit to put the Power Miner driver in control!</br>* Measures over 4" (10cm) longin control!