8189 Magma Mech is a set released in December 2009[1] as part of the Power Miners line (being set number 14 in the series). Included are Rex (Silver) and Firax monster minifigures. It includes the Power Miners lava-proof body armour suit, and is based around the Magma Mech, an armoured machine capable of handling and capturing Lava Monsters.

The body of the Magma Mech has a cockpit with a barred roof and floodlights, and two water blasters are featured on the front. The drill has one of the Power Miners drill bricks that only is included in that theme, and also is the only set in which it can be received in that colour. The claw can retract right back to rest on the arm, and can also grab lava monsters, but cannot pull them back. The two claw bricks are the same pieces as the blades of the spinning shield from Tahu in his last appearance as a Nuva. The legs do not have much mobility, but can move where the are joined to the body, and at the ankle. There are two jets on the backs of the legs, much like the Silent Strike from Exo-Force. The miner has body armour, the same shape as the Agents 2.0 body armour, and the monster has black markings on his body, orange eyes, and a normal lava monster head. 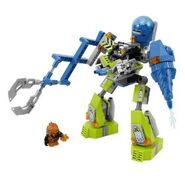 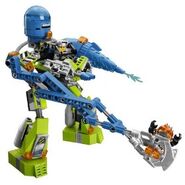 The claw function in action

The Magma Mech
Add a photo to this gallery