Brickipedia
Register
Don't have an account?
Sign In
Advertisement
in: Class 3 articles, Sets listed for ages 11-16, TECHNIC,
and 2 more

8258 Crane Truck is a TECHNIC set released in 2009. It builds into a large, four axle cab-over semi tractor with a crane and fifth wheel. It contains 1877 pieces and is the third largest TECHNIC set piecewise (the largest set is 8110 Mercedes-Benz Unimog U 400). It includes a Power Function's battery box, an XL-motor and a Power Function's switch. 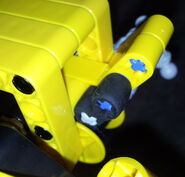 Blocking mechanism where the rubber part is used

the two pairs of steering wheels have different steering mechanisms

transmission of movement to the crane

last of the 187 construction steps

four manuals for the assembly instructions