Brickipedia
Register
Don't have an account?
Sign In
Advertisement
in: Class 4 articles, Sets listed for ages 5-12, City,
and 5 more
English

8403 City House is a City set released in July 2010. It comes with three minifigures and a dog. It is a white three story house with a garden and a treehouse. It has a very similar structure to, and its buildings can be rearranged with 7641 City Corner, 7633 Construction Site, 7848 Delivery Truck, and 3661 Bank & Money Transfer.

The City House rests on a green baseplate. In front of the house is a grey sidewalk, and the yard contains a tree house, a barbecue, and a tree. Also in the yard and connecting to the side of the house is a white wall, which contains an arched gateway in the centre. The tree house rests against this wall. At the front of the house is a grey front porch, on which rests a red lawn chair. A blue arched roof covers most of the porch. The house itself is mostly white. The window frames and door frames are red, while the roof is grey. The house has three levels that can be separated from one another. On the ground level is a small kitchen and dining room, on the first floor is a living area, and on the second floor is a small bedroom. There is one small window on each of the lowest two floors, and two large ones on each side of each of them. On the final floor are two small windows side-by-side on one side of the house. The roof mainly consists of sloped grey bricks, as well as two angled solar panels. The back of the house is open to allow for play. 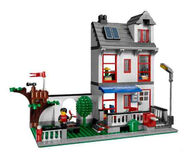 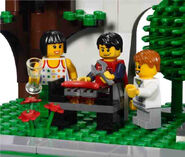 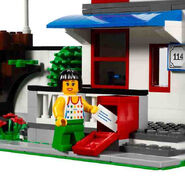 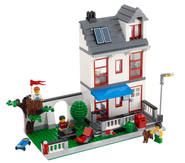 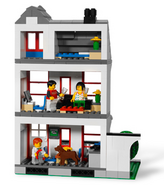