8531 Pohatu is a 49 piece LEGO BIONICLE set released in 2001. It contains a BIONICLE model of Pohatu, the Toa Mata of Stone, and a boulder.

Pohatu Mata's weapons were additions that went on his feet, and when you turned a gear on his back, his leg would kick. As a Toa Nuva, he was equipped with Nuva Armour and claws, which could be formed to create the Kodan Ball. As a Phantoka, Pohatu had a Midak Skyblaster and weapons that tripled as propellers, claws, and drills.

Pohatu's Toa Mata and Toa Nuva's figure had its torso built upside down for his legs to move instead of his arms. Turning the gear on his back will cause his legs to rotate.

Pohatu is so immensely strong that he can literally move mountains. He can make massive rocks explode like bombs or roll with great precision towards an attacker. His huge feet contain great power, smashing even the most unyielding stones with a single kick!

All the Toa like Pohatu for his kind nature and for his rock-solid dependability. He’s slow, but friendly and reliable. He’s not good at snap decisions, but when he makes a decision to do something, he stands firm until the end—so DON’T get in his way! Whenever there is trouble, Pohatu will always be there behind you, an immovable force that few enemies can dislodge. His only fear is water: he cannot swim, and he sinks... like a stone.

Pohatu inhabits the foothills of Mount Ihu, moving slowly but sure-footedly among the rocks and boulders at the base of the great mountain. 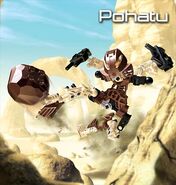 Pohatu in the game. 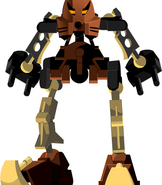 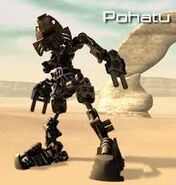 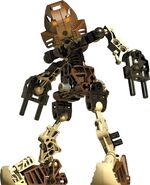 Retrieved from "https://brickipedia.fandom.com/wiki/8531_Pohatu?oldid=1967027"
Community content is available under CC-BY-SA unless otherwise noted.