8532 Onua is a LEGO BIONICLE set released in 2001. It contains 30 pieces to construct "Onua", who in the BIONICLE storyline is a Toa of earth, wearing black armour.

Onua wears the Kanohi Pakari, the mask of strength. In the first arc, he collected five masks and used them to combine into one gold mask. When Onua transformed into a Toa Nuva, his mask became the Pakari Nuva as well.

Onua has been released three times in sets. The first was in 2001 as a Toa Mata, and in 2002 as a Toa Nuva. In summer 2008, he was released with Tahu and Gali as Mistika canister sets.
As a Toa Mata, Onua was armed with claws that moved up and down if you turned a gear in his back.

Onua is at home below ground. With his huge hands he scrapes out tunnels in the rocky cliffs over Papu Nihu Reef. His low, squat body and head allow him to move quickly in tunnels and his infrared eyes give him amazing night vision.

In daylight his eyesight is poor, although he compensates with amazingly powerful hearing. He is slower on open land than underground, but has incredible strength and surprising dexterity.

Onua is at one with the land. He can hear trouble coming from miles away, and on occasion can even persuade the landscape to do his bidding-which is very useful when under attack. 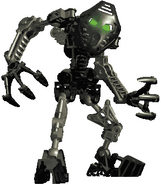 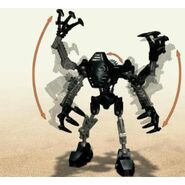 Onua in the Mata-Nui Online Game 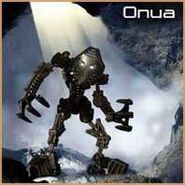 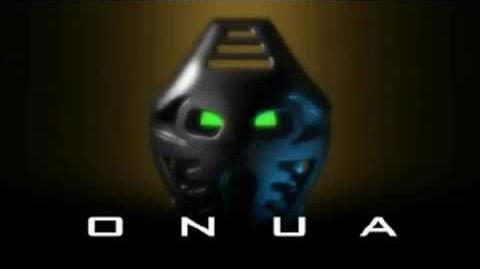 $9.99 +
Released
July 2001 (US) / January 2001 (UK) +
ShopDescription
Mighty as the earth Wise and powerful, Onua has huge, clawed hands to dig tunnels in the ground and infrared vision to allow him to see in the dark. Turn the wheel on his back to move his powerful arms! +
Theme
BIONICLE +
Title
Onua +
Type
Set +
USPrice
$6.99 +
Advertisement