8534 Tahu is a 33 piece LEGO BIONICLE set released in 2001. It was one of the first BIONICLE sets. Tahu is the leader of the Toa Mata, and one of the main characters of the BIONICLE storyline.

Tahu has red robotic feet and orange mechanical legs, connected his torso by black 32174 socket parts and one long axle. His torso is red, and has a small black ball joint attached to it by an axle connection. Tahu's head, attached into the torso by a black beam part, is grey and has a pink eye/brain piece. He wears a red Hau mask. His arms are attached into his torso by black ball socket parts. One has a flaming sword attached directly into it, and one has a red hand/shield on the end. Turning the gear on his back will cause his right arm to rotate.

Tahu was released in 2001. As a Toa Mata, Tahu carried a fire sword, and when a gear in his back was turned, his arm with the sword would move up and down. He wore a red Kanohi Hau, the Great Mask of Shielding. In the 2003 storyline, Tahu was released in his new form as a Toa Nuva in the set 8572 Tahu Nuva. An entirely new set based on the original Tahu figure was released in 2010 as part of the BIONICLE Stars subtheme, 7116 Tahu.

Tahu is the fiercest of the six Toa, and the most feared—you don’t want to get into a fight with Tahu if you can help it.

He is most at home in the hot molten world of the Mangai Volcano where he surfs on lava flows, using his sword of flames to cut through rocks and keep the lava moving towards the ocean.

His flaming temper can make him hotheaded and irrational sometimes. He has the least patience of the Toa and often jumps into a situation without thinking, which can get him, and the other Toa, into trouble! 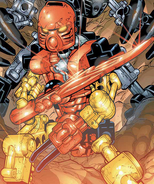 Tahu in the comics

Tahu in The Legend of Mata Nui 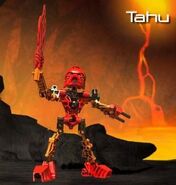 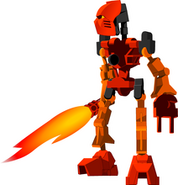 $9.99 +
Released
July 2001 (US) / January 2001 (UK) +
ShopDescription
Fierce as fire Tahu, the Toa of fire, is respected for his power and feared for his quick temper. He can surf on molten lava and cut through solid rock with his sword of flames! Use the wheel on his back to raise and lower his sword. +
Theme
BIONICLE +
Title
Tahu +
Type
Set +
USPrice
$6.99 +
Advertisement