8535 Lewa is a LEGO BIONICLE set released in 2001 and is one of the six Toa Mata sets. It features the Toa of Air, Lewa, who wears a Great Kanohi Miru, the mask of levitation.

Lewa is supremely competent with aerial activities. He glides through the air with ease while jumping from tree to tree. His axe effortlessly slices through trees and vines as he climbs through his jungle around Kanae Bay. Lewa prefers to inhabit the treetops because he is somewhat clumsy on land and flat surfaces.

Lewa is quick to jump to conclusions--and he’s the first to get into trouble. But his instincts are often true, and his hunches frequently turn out to be correct. If there’s a fight, he’s always the first to jump in, protecting others before himself. 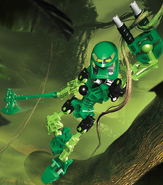 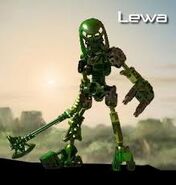 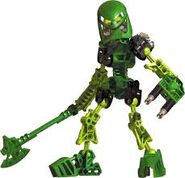