This set includes an exclusive Knightmare Batman minifigure, two green Parademons and a small turret. The Batman minifigure comes with a cowl with printed goggles, printed trenchcoat and scarf over his 2016 suit, printed arms and dual-molded printed legs. It also has a rifle with a Joker card in it. The Parademons come with two different wing pieces.

From the 2016 movie Batman v. Superman: Dawn of Justice comes this accessory set, based on the "Knightmare" scene. In this dream sequence, the world has become a darker place, where Superman rules as a tyrant with the help of his loyal soldiers and parademons. Batman and other members of the rebels look for a way to stop him. 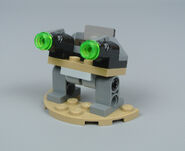