Brickipedia
Register
Don't have an account?
Sign In
Advertisement
in: Class 3 articles, Sets listed for ages 8+, BIONICLE,
and 3 more

This article is about the BIONICLE set. For the type of Racers figures with a similar name, see Rama.

8537 Nui-Rama is a 138 piece BIONICLE set released in 2001. It contains two Nui-Rama Rahi made from TECHNIC parts.

The main function of the models is a wing-snapping mechanism. By pushing their upper bodies forward with your thumb, their rubber wings lash forward. When playing with a partner, these could be used to knock off the Infected Masks from your opponent's Nui-Rama, which are attached to the head of the creature (imitating eyes).

The set contains four transparent blue Noble Ruru Kanohi masks. The main difference between the two models is their colour scheme (orange and lime green), as well as their heads − the orange one has a huge, hooked proboscis, the green one sports teeth. The two can be combined to make a Nui-Kopen.

According to the BIONICLE storyline, these Rahi were under the control of Makuta Teridax, and used them to threaten the Matoran villagers of Mata Nui, as well as fight the Toa Mata/Toa Nuva. After removing the masks, they became less fearsome, although Nui-Rama always pose a threat to anyone they can overpower. They usually attack in swarms. 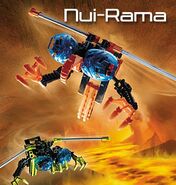