Brickipedia
Register
Don't have an account?
Sign In
Advertisement
in: Class 4 articles, Sets listed for ages 7+, BIONICLE,
and 3 more

8544 Nuju is a BIONICLE set released in 2001. He is the leader of the village of Ko-Koro and protector of Kopaka's legend. He carries an ice pick. Turaga Nuju only communicates using clicks and whistles, but he has been known to speak occasionally. The Ko-Matoran named Matoro is his interpreter. Pushing the lever on his back will cause his arm to move. He also wears the Noble Matatu, the Mask of Telekinesis. 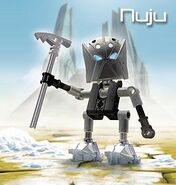