8546 BIONICLE Power Pack is a BIONICLE set released in 2001. It contains a Matoran named Hafu (Similar to the 2001 McDonald's Matoran sets), a chrome silver Kanohi Rua in a shape of a Kanohi Hau, and a PC CD-Rom to hear music.

Additionally, the liner notes folded out to reveal a poster depicting the island of Mata Nui on one side next to images of the Toa Mata and their Makoki Stones, and an ad for 2001 BIONICLE products on the reverse, situated beneath the cover image, Hafu's instructions, and information on the music. It was only ever available in Universal stores.

The set contained a music CD with the following songs:

Also included was a Kanohi Rua, belonging to Wairuha. It is shaped like a Kanohi Hau, although it is actually a Kanohi Miru in the story. 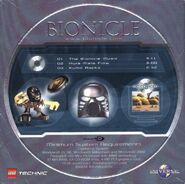 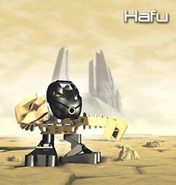