Brickipedia
Register
Don't have an account?
Sign In
Advertisement
in: Class 4 articles, Sets listed for ages 9+, BIONICLE,
and 2 more

8557 Exo-Toa is a 360 piece BIONICLE set released in 2002 as a Titan set. It can be piloted by a Toa Mata or Toa Nuva figure or function independently. It includes a missile cannon.

Exo-Toa are armoured suits that could be worn by the 2001 Toa Mata and the 2002 Toa Nuva. However, neither Pohatu figure will fit without total reconstruction, and slight modifications are needed for 8532 Onua to fit.

In the 2002 storyline, the Toa tried to use the suits to defeat the Bahrag, but took them off after they realized using them reduced their power. In 2003, The Exo-Toa (unpiloted) later made an effort to defeat the Bohrok-Kal, but failed and were destroyed.

Exo-Toa would later reappear (controlled by auto-pilot) among the ranks of the Brotherhood of Makuta's armies. 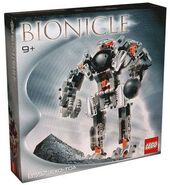 Tahu in his Exo-Toa armour preparing to fight Cahdok

All six Toa, wearing golden kanohi and in their Exo-Toa armour

£24.99 +
Released
July 2002 +
ShopDescription
Ultimate power for your Toa! When a … Ultimate power for your Toa!</br></br>When a Toa dons the Exo-Toa armor, he wields more power than any being on Mata Nui has ever known! Hidden underground for centuries, the Exo-Toa features a mighty claw arm and an electro-missile that really fires. But will even the power of the Exo-Toa be enough to overcome the Bahrag? Exo-Toa be enough to overcome the Bahrag? +
Theme
BIONICLE +
Title
Exo-Toa +
Type
Set +
USPrice
$34.99 +
Advertisement