Brickipedia
Register
Don't have an account?
Sign In
Advertisement
in: Class 4 articles, Sets listed for ages 7+, TECHNIC,
and 3 more
English

The set can be rebuilt into a Waikiru.

The Pahrak very rarely get angry, but if they do, you’d better look out! Once they decide to tackle a problem, they won’t quit until it is solved.

They do not mind ignoring outsiders until it becomes clear that they must defend themselves. When they do, they advance slowly but surely towards the nuisance -- nothing will deter them. However, after an attack they will usually return to their mission quickly. To stop a marching swarm you have to chip away at the column, little by little. 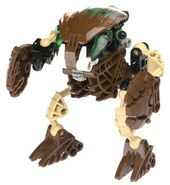 £4.99 +
Released
January 2002 +
ShopDescription
The power of the earth! The Pahrak … The power of the earth!</br></br>The Pahrak are the most unrelenting of the Bohrok, never giving up until their destructive work is done. Their shields have the power to set off earthquakes, and they can move massive boulders with their bare hands. No matter what the obstacle, Pahrak can reduce it to rubble! But if you remove their krana, the Pahrak can be tamed!move their krana, the Pahrak can be tamed! +
Theme
BIONICLE +
Title
Pahrak +
Type
Set +
USPrice
$7.99 +
Advertisement