8563 Tahnok is a LEGO BIONICLE set released in 2002. It contains the Fire Bohrok, Tahnok, and a blue Krana. It was $7.99 in the United States of America and £4.99 in the United Kingdom and is recommended for ages seven and up.

Tahnok are dangerous and unpredictable, wielding with elemental fire powers and armed with Fire Shields capable of melting almost anything. They are built for fast, vicious attacks, and have lightning-fast reflexes. They are usually considered the "main" Bohrok, and are generally used most commonly used in advertising.

The Tahnok are quick workers. But despite their speediness, they are still very methodical and they know the value of teamwork. If one of their team is hurt, or in trouble, they will make sure he is safe before they continue their mission.

While Bohrok are not naturally aggressive, the Tahnok are the least passive of the swarms. They anger easily and if threatened, they will strike first and ask questions later. When they strike, they do it as a team, making them all the more dangerous. However, they tend to act impulsively and are not as calculating as some of the other swarms. 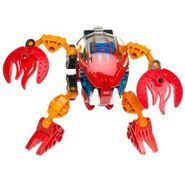 £4.99 +
Released
January 2002 +
ShopDescription
Masters of the flame! The Tahnok ar … Masters of the flame!</br></br>The Tahnok are the most aggressive and destructive of all the Bohrok swarms! They use their mastery of fire to burn and melt whatever's in their way. Even with their krana removed, Tahnok are hard to tame. Can the Toa stop them before they turn Mata Nui into ash?p them before they turn Mata Nui into ash? +
Theme
BIONICLE +
Title
Tahnok +
Type
Set +
USPrice
$7.99 +